The Sundarbans mangrove forest, one of the largest such forests in the world (140,000 ha), lies on the delta of the Ganges, Brahmaputra and Meghna rivers on the Bay of Bengal. It is adjacent to the border of India’s Sundarbans World Heritage site inscribed in 1987. The site is intersected by a complex network of tidal waterways, mudflats and small islands of salt-tolerant mangrove forests, and presents an excellent example of ongoing ecological processes. The area is known for its wide range of fauna, including 260 bird species, the Bengal tiger and other threatened species such as the estuarine crocodile and the Indian python. 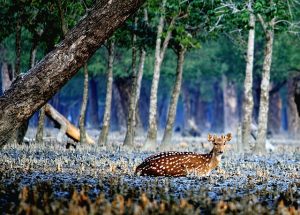 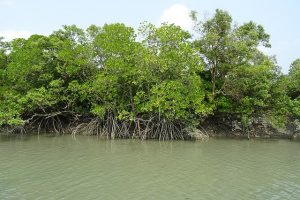 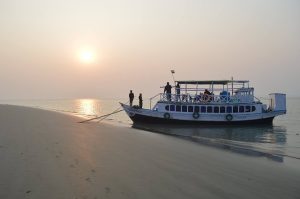 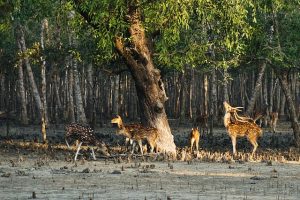 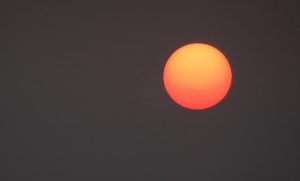 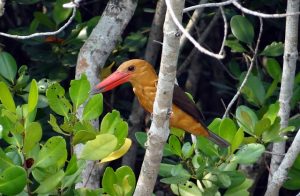 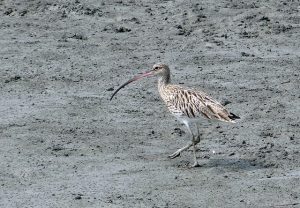 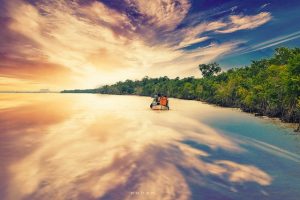 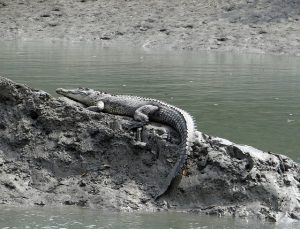 Sundarbans, The largest single block of tidal halophytic mangrove forest in the world, located in the southwestern part of Bangladesh. It lies on the Ganges-Brahmaputra Delta at the point where it merges with the bay of bengal. The forest lies a little south to the Tropic of Cancer between the latitudes 21°30’N and 22°30’N, and longitudes 89°00’E and 89°55’E. With its array of trees and wildlife the forest is a showpiece of natural history. It is also a centre of economic activities, such as extraction of timber, fishing and collection of honey. The forest consists of about 200 islands, separated by about 400 interconnected tidal rivers, creeks and canals.

The Sundarbans was originally measured (about 200 years ago) to be of about 16,700 sq km. Now it has dwindled to about 1/3 of the original size. Because of the partition of India, Bangladesh received about 2/3 of the forest; the rest is on the Indian side. It is now estimated to be about 6,000 sq km, of which about 1,700 sq km is occupied by waterbodies. The forest lies under two forest divisions, and four administrative ranges viz Chandpai, Sarankhola, Khulna and Burigoalini and has 16 forest stations.

The Bangla word ban means forest, and the name Sundarban was coined either from the forests of Sundari tree ie Sundari-ban, or from the forests of the samudra (sea) ie, Samudra-ban, or from its association with the primitive tribe Chandra-bandhe which was corrupted into Sundarban. The generally accepted explanation, however, is its derivation from the sundari tree, the most common tree in these forests.

Geology The tract of the Sundarbans is of recent origin, raised by the deposition of sediments formed due to soil erosion in the Himalayas. The process has been accelerated by tides from the sea face. The substratum consists mainly of Quaternary Era sediments, sand and silt mixed with marine salt deposits and clay. Geologists have detected a southeastern slope and tilting of the Bengal basin during the Tertiary. Because of neo-tectonic movements during the 10th-12th century AD, the Bengal Basin titled eastward. Evidence from borehole studies indicate that while the westernside of the Sundarbans is relatively stable, the southeastern corner is an active sedimentary area and is subsiding.

Soil Soils of the Sundarbans mangrove forest differ from other inland soils in that they are subjected to the effects of salinity and waterlogging, which naturally affect the vegetation. In places soils are semi-solid and poorly consolidated. The pH ranges widely from 5.3 to 8.0. Although the Sundarbans soil is in general medium textured, sandy loam, silt loam or clay loam, the grain size distribution is highly variable. Silt loam is dominant textural class. Sodium and calcium contents of the soil vary from 5.7 to 29.8 meq/100g dry soil and are generally low in the eastern region and higher towards the west. The available potassium content of the soil is low, 0.3-1.3 meq/100g dry soil. Organic matter content varies between 4% and 10% in dry soil. Soil salinity increases from east (slight to moderate) to west (highly saline), but the salinity is not uniform from north to south throughout the forest.

Climate Since the forest is located on the south of the Tropic of Cancer and bounded by the northern limits of the Bay of Bengal, it is classified as tropical moist forest. The temperatures in the Sundarbans are fairly equable than those of the adjacent land areas. The average annual maximum and minimum temperatures vary between 30° and 21°C. High temperatures occur from mid-March to mid-June and low in December and January. The mean maximum temperature for the hottest months has been recorded as 32.4°C at Patuakhali, in the east of the Sundarbans.

The mean annual relative humidity varies from 70% at Satkhira to 80% at Patuakhali. Humidity is highest in June-October and lowest in February. Annual rainfall in the Sundarbans is in the range of 1640-2000 mm, rainfall increases from west to the east. Most rainfall occurs during the monsoon from May to October. Frequent and heavy showers occur from mid-June to mid-September. Often storm accompanied by tidal waves result widespread inundation and cause damage to vegetation and animal life.

Vegetation The vegetation is largely of mangrove type and encompasses a variety of plants including trees, shrubs, grasses, epiphytes, and lianas. Being mostly evergreen, they possess more or less similar physiological and structural adaptations. Most trees have pneumatophores for aerial respiration. The prominent species is Sundari (Heritiera fomes) and Gewa (Excoecaria agallocha). Prawn (1903) recorded 334 species under 245 genera. Of these 17 are pteridophytes, 87 monocotyledons and the rest are dicotyledons. The plant species include 35 legumes, 29 grasses, 19 sedges, and 18 euphorbias. Of the 50 true mangrove plant species recorded, the Sundarbans alone contain 35. Almost all mangrove plant species are evergreen, dwarf, shrubby or tall trees, and grow gregariously without leaving any space on the floor.

In the Sundarbans the saltwater forest is situated in the south-western part where Gewa (E. agallocha), Goran (Ceriops decandra), Keora (Sonneratia apetala), Ora (S. caseolaris), Passur (Xylocarpus mekongensis), Dhundul (X. granatum), Bain (Avicennia alba, A. marina, A. officinales), and other rhizophores, and Hantal (Phoenix pelludosa) dominate. The typical mangrove species dominate the central part of the forest. The moderate saltwater forest covers most of the southern parts of Khulna and Bagerhat districts where Sundari is the dominant species.

There is a thick mat of the nipa palm or ‘Golpata’ (Nipa fruticans) by the side of almost all the canals. The moderately freshwater zone results from the large amount of water, which flows down the Passur, Haringhata and Burisher, maintaining the surface water at a lower level of salinity.

The Sundarbans shows some distinct phyto-succession, where the newly formed lands are occupied by some pioneer species viz Leersia hexandra, wild rice (Potresia species), followed by Avicennia, Sonneratia and Aegiceras. The secondary succession occurs due to Ceriops, Excoecaria, Bruguiera, Heritiera, Xylocarpus and Rhizophora. Tiger fern (Achrostichum aureum) mostly covers the ground floor, which is common in saltwater and moderately saltwater zones. Tigers use these bushes to camouflage themselves.

The ecological diversity of the Sundarbans supports a large variety of birds. Among the total number of species recorded, most are resident. Over 50 species are known to be migratory and are mostly represented by the waterfowls. The egrets, storks, herons, bitterns, sandpipers, curlew, and numerous other waders are seen along the muddy banks.

There are many species of gulls and terns, especially along the seacoast and the larger waterways. Accipitridae (kites, eagles, vulture, harrier etc) is represented by about 22 species. Nine species of kingfishers are available in the forest. The rich avifaunas of the forest include species of woodpeckers, barbets, owls, bee-eaters, bulbul, shrikes, drongos, starlings, mynas, babblers, thrush, oriole, flycatchers, and many others.

Of about 50 species of reptiles the largest member in the Sundarbans is the Estuarine crocodile (Crocodylus porosus), some of which may attain a length of about seven metres. Although once they were abundant in this mangrove habitat, their total number is now estimated to be around 250. Species of lizards, including the Monitor Lizards Varanus, turtles, and snakes are well-represented. Among the snakes, the King Cobra (Ophiophagus hannah), Russell’s Viper (Vipera russellii), Rock python (Python molurus), Banded Krait (Bungarus fasciatus) and several species of sea snakes are notable.

Only eight species of amphibians have been reported from the Sundarbans. The green frog (Euphlyctis hexadactylus) is mostly observed in Chandpai area of the mangrove forest. The other forest amphibians include the Skipper frog (E. cyanophlyctis), Cricket frog (Limnonectes limnocharis), Tree frog (Polypedates maculatus), and the common toad.

The Sundarbans supports nearly 400 species of fishes in its varied aquatic habitats; these include both the pelagic and demersal fishes. Many species use these habitats as nursery grounds. No aquaculture or fish farming is allowed in the Sundarbans. The Forest Department controls the fish catch from the area.

Among the invertebrates some molluscs and crustaceans constitute important fisheries resources. About 20 species of shrimps, 8 species of lobsters, 7 species of crabs, several species of gastropods, and 6 species of pelecypods have been reported from the Sundarbans. Among the shrimps Penaeus monodon and Metapenaeus monoceros and the mud crab Scylla serrata are commercially important. Insects are varied, the most important being the honeybee Apis dorsata. Locally known as ‘Mouals’, the professional bee collectors gather honey for three to four months during the flowering season taking permission from the Forest Department. The forest is very rich in its spider fauna (Araneae). Nearly 300 species under 22 families have been recorded from the mangrove forest habitats.

Economic value, tourism and forest dwellers The most important value of the Sundarbans lies in its protective role. It helps hold coastlines, reclaim coastal lands, and settle the silt carried by the rivers. The estuary is a good breeding centre for many fishes. Several plant-based industries have been developed here. The most important ones are the newsprint and hardboard mills in Khulna.

The raw material for the former is gewa and for the latter sundari. Other important plant-based industries are match factories and boat building. The forest is a good source of fuel, tannins, thatching, wooden articles, medicinal plants, and fodder. The forest is also a major source of honey and bee wax. Aegiceras corniculatum, Ceriops decandra, Nipa species, Derris species, and Hibiscus tiliaceous are the major honey plants.

Most frequently visited sites in the Sundarbans include Katka, Hiron Point (known commonly as Nilkamal), Dublar Char and Tiger Point (Kachi Khali). Katka attracts tourists for its landscape and wildlife. There is a forest rest house here and an observation tower. Hiron Point also has a rest house and an observation tower. Dublar Char is an island with a beautiful beach. The other attraction of the island is the fishing activities that take place every year between mid-October and mid-February. Fishermen from other places of the country, especially from Chittagong, assemble here during the period to catch fish and dry them on the sunny beach. The honey collectors go into the forests during April-May.

Only a few people live permanently in or around the Sundarbans. They include the bawalis (collectors of golpata), mouals (honey collectors) and woodcutters. Their dwellings are usually at the edge of the forest and the houses are built on platforms supported on 3-5 m high poles of wood or bamboo. Some people, especially the bedyas (gypsy) live on boats. [Mostafa Kamal Pasha and Neaz Ahmad Siddiqui]

Sundarbans forest regeneration Natural regeneration refers to renewal of a tree crop by natural means, as opposed to artificial regeneration by means of planting or sowing as done in mangrove plantation. The mangrove of the Sundarbans is dependent on natural regeneration for its existence. Over the greater part of the forest, seedling recruitment was sufficient for replacement of the harvested trees. The average number of seedlings appearing per year was about 27,750/ha although recruitment densities varied considerably among different parts of the forests. Heritiera fomes, Excoecaria agallocha and other species together constituted about 24, 54 and 22 percent of the recruits (three months old seedlings), respectively.

Salinity of the area apparently influences the regeneration density which decreases with increasing level of salinity. There is year to year variation in recruitment. However, salinity appears to have little influence on these variations. Variation in seedling recruitment among the three salinity zones seems to be significant. Seedling recruitment for H. fomes, E. agallocha, and other species shows highly fluctuating values over the years. Such fluctuation might be due to the existence of periodicity in the seed production of some species. [Neaz Ahmad Siddiqui]